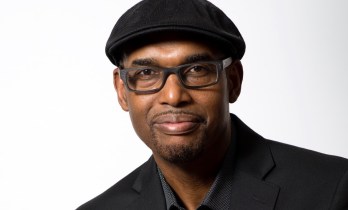 Gerald Veasley’s musical odyssey has taken him around the world, but no matter where the celebrated bassist, bandleader, composer, educator, and curator has traveled he has always called Philadelphia home.

He brings his drive and passion for educating and motivating other musicians to his role as president of Jazz Philadelphia, where he hopes to celebrate and lift up the city’s jazz history, its established artists, and the next generation of Philadelphia-bred musicians.

Veasley attended the University of Pennsylvania, where he studied political science. However, he has dedicated his life to music; not only performing and recording but to educating and motivating other musicians. He has served on the faculty of Philadelphia’s University of the Arts and is the co-founder and artistic director of Gerald Veasley’s Bass BootCamp. The annual event, which was established in 2002, has informed and inspired hundreds of bass players of all levels and ages.

Veasley has recorded ten albums as a leader, including “The Electric Mingus Project” which reimagines the music of legendary bassist/composer Charles Mingus; “I Got Life”, a tribute to Nina Simone; and “Live at SOUTH” a collection of funk-tinged jazz originals captured in concert. Schooled by his mentors Joe Zawinul (of Weather Report fame) and saxophone giant Grover Washington Jr., Veasley seeks to blur musical boundaries, respecting tradition while moving forward.

Live at SOUTH was also the outgrowth of Veasley’s role as a curator of the Unscripted Jazz Series at SOUTH Jazz Parlor. Launched in October 2015 and co-curated by his wife and business partner Roxanne Veasley, the weekly series presents artists who, like Veasley, have broad musical tastes and experiences. The series has attracted many celebrated guest artists who appreciate the opportunity to showcase their versatility: Gerald Albright, David Benoit, Rick Braun, Randy Brecker, Alex Bugnon, Chuck Loeb, Eric Marienthal, Maysa, Raul Midón, Janis Siegel, Peter White, Kirk Whalum, and a growing roster of established and emerging artists.

The series’ stellar lineup features many of the same artists whose music was featured on the radio show he hosted on WJJZ, artists who have performed with him at major jazz festivals. Veasley plays an integral role in the Berks Jazz Festival, having presented concerts and All-Star jam sessions there for more than two decades. He currently serves as official Musical Host for the ten-day event.