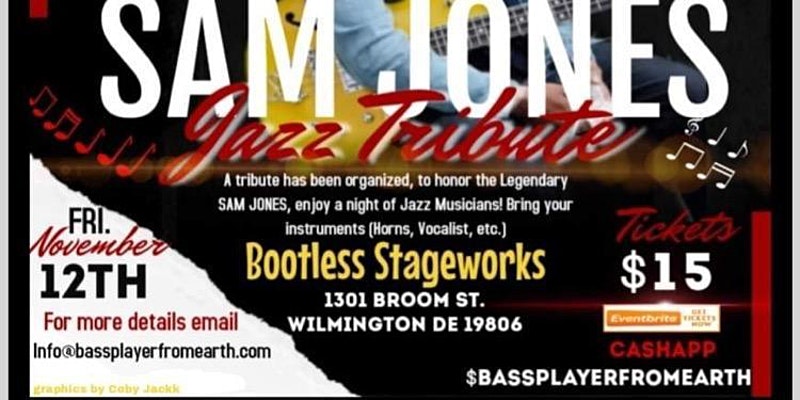 A tribute has been organized by bassist Richard Hill to honor the legendary bassist Sam Jones who passed away from lung cancer in 1981. Enjoy a smooth night of jazz, and participate in a jam session immediately following the second set. Musicians….Bring your instruments (Horns, vocals, etc.)

Masks REQUIRED to enter, and all COVID-19 protocols will be followed!

Sam Jones was born in Jacksonville, Florida, United States, to a musical family. His father played piano and drums and his aunt played organ in church. In 1955, he moved to New York City and began his recording career with Tiny Bradshaw, before working with Bill Evans, Bobby Timmons, Les Jazz Modes, Kenny Dorham, Illinois Jacquet, Freddie Hubbard, Dizzy Gillespie (1958–59), and Thelonious Monk. He is probably best known for his work with Cannonball Adderley, performing in his quintet from 1955 to 1956 and then again from 1959 to 1964, and recording extensively for Riverside Records as both a leader and sideman. He later spent several years working with Oscar Peterson (1966-1970) and Cedar Walton (1972-1977). In the 1970s, Jones recorded several albums as a bandleader for the Xanadu and SteepleChase labels. Jones wrote the jazz standards “Del Sasser” and “Unit 7” while working with Adderley. Other compositions include “Blue Funk”, “O.P.”, “Bittersweet”, and “Seven Minds”.