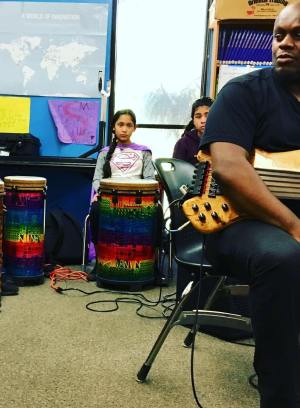 Anthony Tidd is a Philly transplant, and the child of Trinidadian parents, who was born and raised in London, England. He attended the Newham Academy of Music (London), Guild Hall (London), Thurrock College of Music (Grays), and Goldsmiths University (London), but his true music education took place during his 24 years (and counting) stint with jazz alto saxophonist and McArthur genius Steve Coleman. Tidd has had the pleasure of working with a number of celebrated names, including Greg Osby, Vijay Iyer, Talib Kweli, Rudresh Mahanthappa, Meshell Ndegeocello, Common, Jill Scott, De La Soul, David Byrne, Frank Ocean and many others. In 2002, he released his critically acclaimed debut, “The Child of Troubled Times,” with the band Quite Sane. He has written works for everything from small ensembles to full orchestras such as The Buffalo Philharmonic. Tidd is a Grammy Award winner and has produced records for multi-platinum artists such as The Roots, Macy Grey, Zap Mama, Lady Gaga, The Black Eyed Peas, Fergie, and Jill Scott, and he’s composed scores for major film and television projects including Jay Z’s recent Paramount/BET docuseries, “Rest in Power: The Trayvon Martin Story.” Tidd has taught at a number of prestigious institutions including NYU, The New School, the University of Chicago, UCLA, BANFF, Berklee, Engelsholm, The Pavarotti Center, Lincoln Center, The London South Bank and The Royal College of Music. He’s also is also a master lecturer at University of the Arts in Philadelphia and the creator/director of its Creative Music Program, Jazz Camp of Philadelphia. In addition, he’s the curator of Meet the Masters and of popular Philly concert series Sittin’ In, all at the prestigious Kimmel Center, where he currently serves as the Jazz Artistic Advisor.